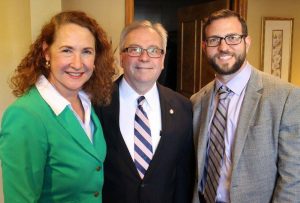 The Bethel Democratic Town Committee Annual Dinner took place on Saturday, April 8, at Michael’s at the Grove, and this year’s event was to honor Mary Gert McCollam. Mary Gert, a legendary figure in Bethel Democratic politics, was to receive the Bill and Jane Shannon Community Service Award.

We had never attended an event like this before, so my wife and I were a little nervous. Would we be instantly recognized as newcomers or outsiders? Would we be relegated to the unpopular table where we would be pelted with wadded up napkins and uneaten food?

Our fears were immediately assuaged when we pulled into the parking lot and saw a smiling Raghib. My wife and I greeted him and went inside, where more familiar faces welcomed us warmly. We saw First Selectman Matt Knickerbocker posing for photos next to Representative Elizabeth Esty. Matt gave us a friendly nod before turning back to the camera, and any remaining anxiety faded away.

Inside the spacious room, knots of people gathered and flowed, many of them familiar from town meetings or Bethel businesses. In one group, State Representative William Tong from Connecticut’s 147th district stood out as a recognizable face, while in another, we spotted State Representative David Arconti from the 109th. We made our way through the room, stopping to talk with several groups before picking up glasses of wine.

Shortly after this, Senator Richard Blumenthal arrived. As he shook our hands, he recognized us from a rally in Westport a few weeks ago. Later, we spoke to Representative Esty, and I mentioned some work of her that I admired, a bill aimed to help veterans with PTSD, and I mentioned a friend involved in that effort. She and her very capable staffer, Sherri Vogt, responded with enthusiasm, and I later learned that Sherri had contacted my friend to tell him that I had expressed my support for the bills. We worked our way back to our table, where we had a chance to talk to both state representatives.

Soon the dignitaries began to speak about Mary Gert’s contributions to her home town, and expressed their admiration for her commitment to Bethel with great warmth. Others took the microphone, and the message from each was the same: we are a community, and we make each other stronger. Only by working together can we accomplish anything, and Mary Gert stands as the embodiment of the local action ethos.

As we left at the end of the evening, my wife and I were impressed by the overall tone of the event. The politicians were sincere and warm, showing obvious interest in their constituents. The members of the public were neighborly and welcoming, enthusiastic about their community. Gatherings like this are crucial in a time when many of us are feeling distraught at the direction our country has moved in the last few months. Despite the chaos and fear in Washington, DC, we can come together as friends and neighbors and work together to improve our world, beginning with our own town.